Who might imagine that this buckaroo and son of the buckaroo would give birth in Brooklyn to a new chapter in the evolution of my journey through the media universe? 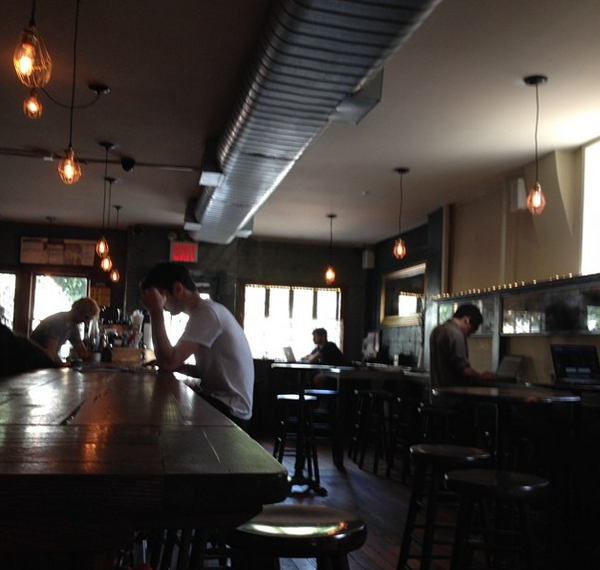 Imagine no longer---and visit The West in Williamsburg--so much better than Manhattan! Enthusiastic hat-tip to Will Ortel!

On Tuesday, tech giant Microsoft will explain how many jobs a cash-rich, uber-profitable enterprise will savage, staying ahead of cut-throat competition in the global marketplace.

Meanwhile, the debt-loving Obama Administration touts “success” in slashing the Federal Government deficit for the year ending Sept. 30, 2014, to $583 billion — an estimate that, even if achieved, still would be markedly higher than largest annual deficits produced before 2008.

The contrast is striking — the reactions from the left and the right likely will prove even more so.

Why does a thriving company like Microsoft eliminate employees now, when it is far more solvent than any government entity in America, well-positioned for the future, and generating profits? Surely, the cruel capitalists who own Microsoft and the fat-cats who oversee its greedy, overpaid managers can be shamed into “spreading some of their wealth around”?

But the reality for companies like Microsoft is much more difficult than it is for the American government.

Unlike governments that force us to pay for services we may or may not need at prices we do not negotiate, Microsoft cannot make anyone buy their products and services. Customers have numerous alternatives — they exercise informed free will when they part with their hard-earned money.

Furthermore, when a business runs into financial trouble, someone must put cash into the company — Microsoft does not control a financial printing press, the way Team Obama seems to (at least for the moment).

In the most recent year for which Microsoft financial results are available (the one that ended June 30, 2013), the Company’s 99,000 employees achieved sales that were 28.8 percent higher at $ 77.8 billion. On a per-employee basis, Microsoft’s sales increased 18.4 percent to $786,354 per employee.

Unlike profligate governments, companies such as Microsoft are held to account promptly when their financial performance deteriorates, even if they take in much more cash than they spend in a given fiscal year.

So Microsoft will correctly prune ahead of trouble, creating rich opportunities for opponents to squeal about inequities.

Feasting off the largesse of donors, progressive luminaries — such as Hillary Rodham Clinton, Sen. Elizabeth Warren and both Obamas — are certain to issue derisive snorts about callous profit-seekers.

They should, instead, subject themselves to the world-beating regimen under which Microsoft thrives.

In 2008, 20.6 million full-time equivalent workers in federal, state, and local governments spent $5,134 billion, or $249,808 per worker — a productivity level far below Microsoft‘s. Furthermore, while Microsoft ran a cash surplus, government workers spent $1,057 billion more than they took in.

Completing the picture, deficits piled up in 2009 through 2013 under President Obama totaled $7,911 billion — this amount is 292 times Microsoft’s 2013 pretax profits.

When the time comes to pay for this recklessness, Americans will share misery equally, rest assured.

In government, the political victors, regardless of which party they are from this time around, entrench a failed system. Public sector unions and impenetrable regulations raise costs past the stratosphere. Meanwhile, cronies feast off the carcass.

All of us need a break from the inspired, far-reaching yet increasingly ignorant attention of faceless government bureaucrats who grow rich from their sainted “service” to our needs.

It is past time for those who suffer in silence to speak truth to power — America needs more Microsofts and less government.